Betrayed: a mother's battle for justice 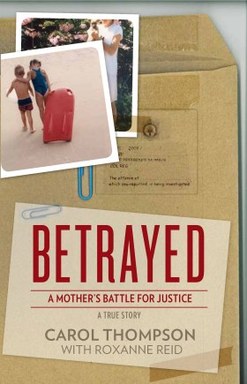 A single phone call shattered Carol Thompson’s life. Her daughter Tracey’s car had been found abandoned on the side of the road. Days later her body was found …

That was in March 2005, but police bungling in the crucial first six months meant that the mystery of who murdered Tracey has never been solved.

Roxanne and Carol first met four years after Tracey died. Together they began a harrowing nine months of raking over past events and emotions so they could write the true story of a life extinguished too soon and a brave mother’s quest for justice.

Betrayed: A Mother's Battle for Justice was published by Tafelberg in May 2011.

Antony Altbeker, author of Fruit of a Poisoned Tree (Jonathan Ball), calls it: 'A harrowing account of a murder, of one mother's loss, and of the many ways our over-burdened, under-performing criminal justice system adds to survivors' pain.'

​Extract from LitNet Book Review by Jonathan Amid, 9 March 2012
During and after reading Carol Thompson’s memoir – written with the help of Roxanne Reid – I was ... moved by Thompson’s unrelenting battle for justice... What is, for lack of a better word, simply overwhelming at times, is the way in which Thompson and Reid construct far more than just an embittered tirade against police incompetence and a glowing tribute to a daughter whose life was cut short... By refusing to paint Tracey as a flawless, romanticised victim of the hardships of life, [the book reveals] a startlingly intimate, credible portrait of the roller coaster ride that is youth, with all of its uncertainties, banalities, triumphs and tortuous insecurities…

[T]his memoir is ... structured to read almost like a literary thriller, and my attention was held for the duration of the reading experience. The writing moves between different moments and time periods, thus keeping the reader in suspense as to the outcome of the investigation and certain key events in Tracey’s life.